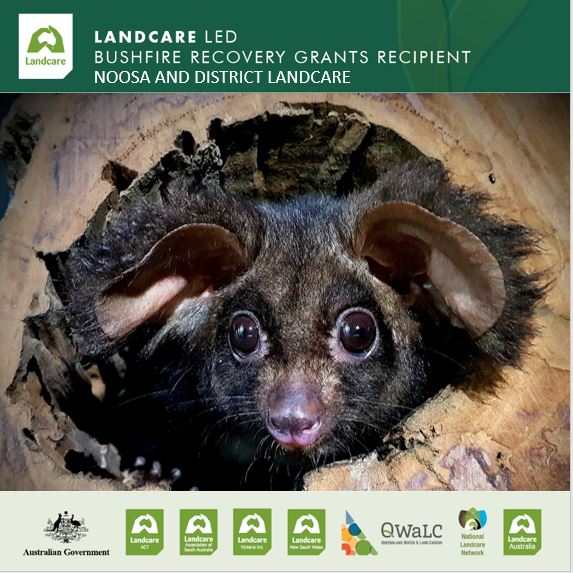 Historical records indicate the existence of several Greater Gliders in the fire zones and a significant population of Yellow-bellied gliders within Cooloola National Park, possibly the largest population in the SEQ bioregion. These populations have never been monitored.

Rachel Lyons, Business and Partnerships Manager at Noosa and District Landcare, said
“From the research we have seen, only 4 to 7 per cent of gliders are seen by people undertaking standard visual surveys.”
In this project, sniffer dogs are being trialled to understand how well they can find greater gliders, which typically reside 30 to 50 metres from the ground in the tree canopy and are notoriously difficult to locate using traditional methods. The sniffer dogs will be used to locate glider scat in the national park and private land where they are thought to be found.

The Glider Awareness Workshop with the community was held on the 16th September 2021. Over 35 people attended and learnt about the plight of gliders, the project aims and survey training by the Queensland Glider Network and Department of Environment and Science. Over 15 people are now assisting with surveys.

Awareness of glider existence by the managing landholders is crucial for the perpetuation of these species. Land managers can undertake simple but protective works including habitat tree protection (removal of fuel before prescribed burns), removal of unnecessary barbed wire fences, retention of habitat trees including dead stag trees, and installation of nesting boxes (50 installed with this project). Gliders require a minimum of 3 hollow trees/ha to persist.