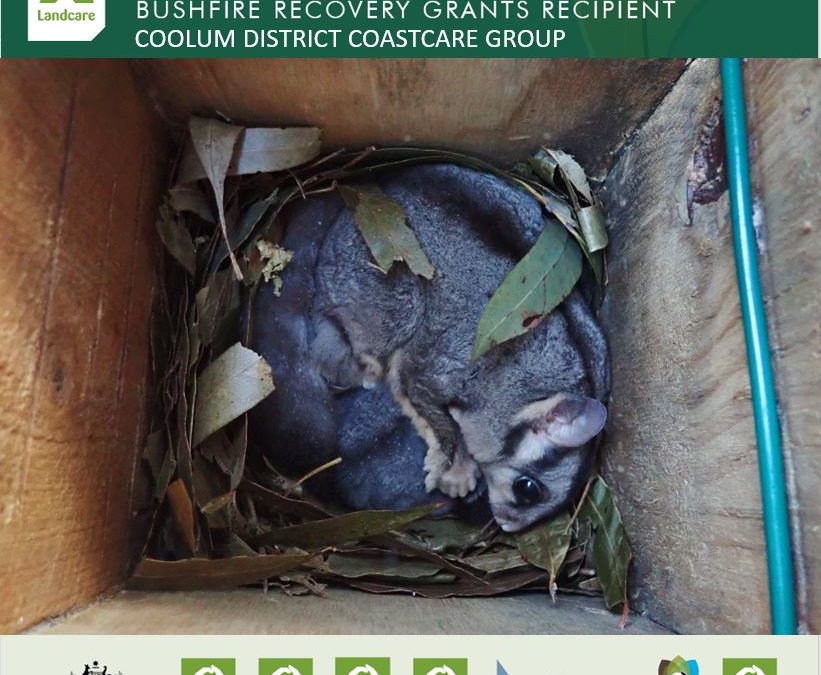 Coolum and North Shore Coast Care (CaNSCC) is excited to report that 21 Hollow Log Home nesting boxes have been installed between Maroochy River and Stumers Creek in Conservation Reserves and Bushland Parks in addition to the existing boxes of which six now have new lids.

CaNSCC first installed nest boxes in 2000 after it was identified that many large trees in the area were being removed for urban development. The loss of “habitat” trees due to urban expansion is catastrophic for hollow dependent fauna species, which is why CaNSCC installed replacement hollows targeting certain fauna species. It is reasonable to assume that a two hundred year old tree could have in excess of 20 hollows of various sizes. The habitat loss due to the clearing of Scribbly gum forest continues today.

There have been a variety of occupants over the years including microbats, birds, gliders, native bees and possums. Also, in that time new nest boxes were added in new areas.

The 2021 audit showed a drop in occupancy due to the dilapidated state of many of the boxes and the impact of fauna displacement due to bushfires. However, an increase in diversity of species including Sugar gliders, Wood ducks, Possums, Owlet nightjars, Native bees was observed. Less occupancy, but greater diversity than previous years, indicated that there were more species to be housed and the current boxes were unsuitable. The housing crisis for hollow log dependent fauna was likely exacerbated by the destruction of habitat in the 2019-20 bushfires which impacted food sources. This caused fauna to be displaced into surrounding bushland putting pressure on existing artificial hollows.
In response, CaNSCC has installed new cyplas nest boxes, made in part from food grade recycled plastic. The longevity of these boxes will create habitat for hollow dependent fauna for decades to come. The boxes are of various shapes and sizes designed for different fauna with signs of occupancy already apparent.

CaNSCC hosted a workshop on 30th October, 2021 with Alan and Stacey Franks to highlight the importance and usage of artificial hollows using data collected over 20 years. Attendees also went for a walk through Maroochy Conservation Reserve at Mudjimba to learn what to look for.

Do yourself a favour and take a walk through Maroochy Conservation Reserve, Yaroomba or Yinneburra Bushland Park, Springfield Avenue Reserve or Cassia Wildlife Corridor. The habitat in those areas provide a food source for many native species. Look up and see if you can spot the artificial nest box homes. Look at the trees for scratch marks or at the entrance to the boxes for marks. You will see evidence of the existence of our shyer neighbours. https://coolumcoastcare.org.au/