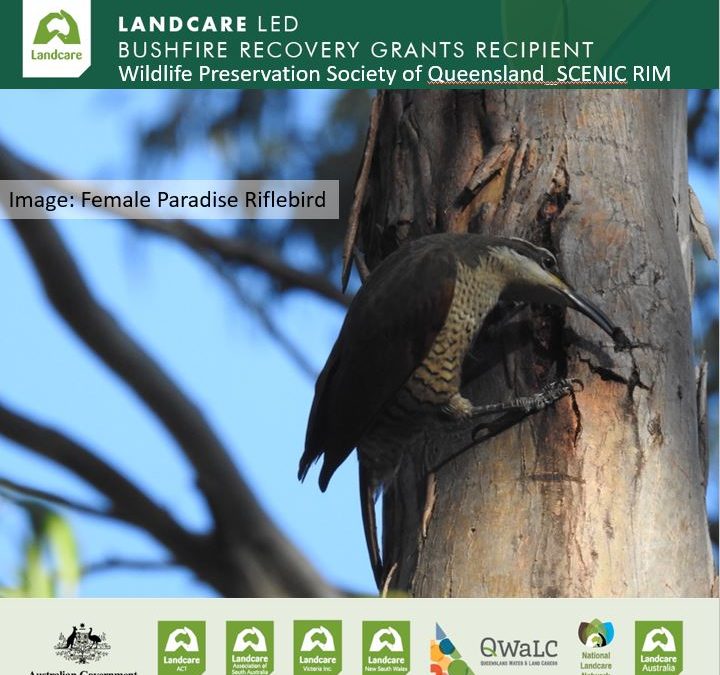 Many threatened species stand to benefit from the work of the Scenic Rim branch of the Wildlife Preservation Society of Queensland (WPSQ) who have been establishing corridors between existing habitat refuges severely affected by the fires of 2019.

This work can continue by providing shelter and corridors for wildlife in the higher country in- and near some of the areas catastrophically burned with almost $49,000 of support from the Landcare Led Bushfire Recovery Grants.

Species supported include Coxen’s Fig-Parrot, Eastern Bristlebird, Brush-tailed Rock-wallaby, Greater Glider, Grey-headed Flying-fox, Koala, Long-nosed Potoroo, Spotted-tail Quoll and Three-toed Snake-tooth Skink, as well as many species that are not currently listed as threatened including multi-coloured fruit doves, the gorgeous regent bowerbird and the world’s only bird of paradise outside of the tropics – the Paradise Riflebird.

“Some of the wildlife we are targeting are already registered as threatened or endangered, but there are others that could soon head that way if we don’t provide for them now. It is less costly in time and finances to enhance their survival now than to wait until it’s critical” explains WSPQ Scenic Rim Chair, Dr Ronda Green.

“Wildlife conservation doesn’t automatically follow when you declare a patch of habitat as a reserve. Animals don’t understand our boundaries and they often need to move beyond them to find resources, mates or to escape from an event such as severe bushfires. While some can easily head out across cleared land to other habitat remnants, many others can’t unless they have at least a few trees or some sheltering shrubs along the way.”

Several meetings of land-owners and educational workshops have been planned in various parts of the Scenic Rim. Some landowners joining the project may choose to plant just a few tall trees for gliders and food. Others can plant a couple of hundred trees and fleshy-fruited understorey plants to facilitate movements by small ground-frequenting mammals, birds and lizards as well as providing food plants for butterfly larvae and nectar for adult butterflies and bees.

Plants for the project are selected for their value to wildlife, especially during lean seasons, but also for being indigenous to the local area, and where possible, relatively fire resistant.