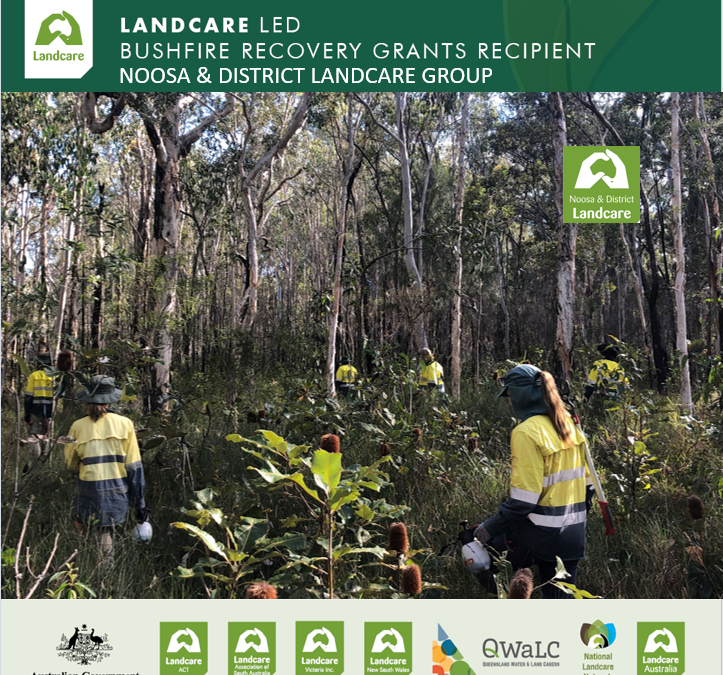 Noosa & District Landcare Group Inc
With $50,000 from the Landcare Led Bushfire Recovery Program, Noosa & District Landcare Group have worked to enhance Cooroibah and Noosa Northshore Fire Zones through weed treatments and revegetation. This project was undertaken in partnership with Noosa Council and included the direct involvement of Kabi Kabi First Nations trainees.
Intense canopy fires and the complete destruction of canopy trees at several locations in the 2019 bushfires had allowed the proliferation of significant vine, grass and shrub weeds to occur over valuable high biodiversity habitat for a variety of species including Koala, Oxlyean Pygmy Perch, Honey Blue Eye, Wallum Sedgefrog, Ground Parrot, Glossy Black Cockatoo, and plant species including Archidendron lovelliae, and Symplocus haroldii.
The weed species present and the scale at which infestations were occurring would not have naturally remediated. Intervention was required to avoid significant impact to the habitat of the local threatened species. Two weed sweeps over the life of this project enhanced 36Ha, with ongoing management beyond the project life by Noosa Council across the Cooroibah and North shore Fire Zone areas. Core bushland areas that may need further follow up have been identified.

Infill corridor revegetation with 3200 plants was undertaken as part of the project to allow for long term koala repopulation. Connectivity improvements in the burn zone in the larger Yurol/Ringtail Forest areas will provide core koala habitat for the region. Restoration works at Cooloothin Creek will have an ongoing impact on the overall species diversity across the site.
Landcare contracting teams increased community awareness of the work being done in areas impacted by fire. Community planting events have helped increase local landholders’ knowledge on the impacts of fire and why natural areas need to be managed. https://noosalandcare.org/