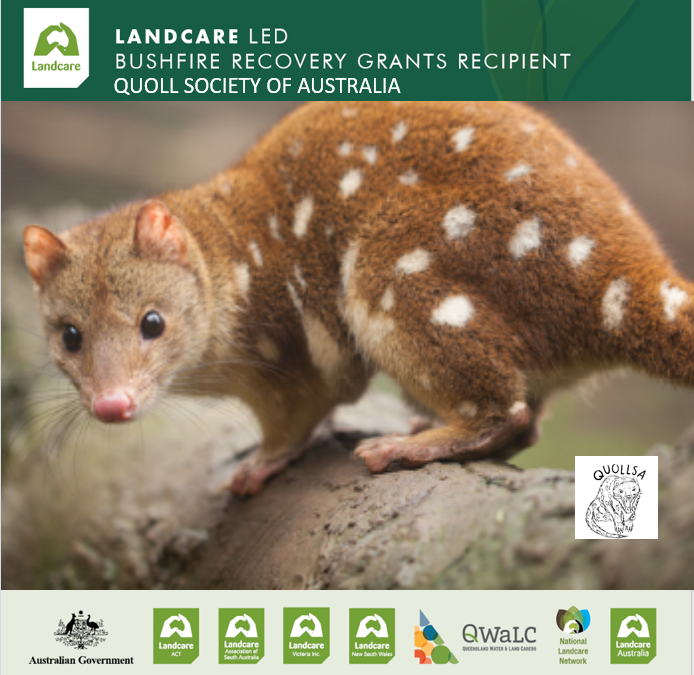 Quoll Society of Australia
The spotted-tailed quoll, our largest marsupial carnivore, is in serious trouble from destruction of its habitat, predation by cats and foxes, and the severe bushfires of 2019/20, quolls are on the verge of disappearing from Queensland altogether. The Quoll Society of Australia (QuollSA) is working to find the last remaining quolls in bushfire affected areas in South East Queensland with the help of $34,000 from the Landcare Led Bushfire Recovery Program.

The project revolves around surveying for quolls using wildlife cameras, working with private landholders to make their properties more quoll-friendly, and generally raising the public profile of this neglected species. Paul Revie, President, QuollSA said, “This project may provide the last chance to find and save the spotted-tailed quoll in southern Queensland.

The first round of camera trapping exceeded the trap night milestones by deploying cameras for more than 3000 nights but no quolls were located at Lamington National Park (Binna Burra section), Main Range National Park (Spicers Gap section) or Bartopia Nature Refuge adjacent to Mount Barney. A very successful volunteer day was hosted at O’Reillys Rainforest Lodge with 19 volunteers assisting with camera deployment. QuollSA has also created a project with DigiVol (through the Atlas of Living Australia) which will allow volunteers from all over Australia, and internationally, to assist in analysing camera trap data which will increase our reach substantially.

The results of the project so far indicate that the spotted-tailed quoll has become extremely rare in parts of southern Queensland where it was once relatively common, including areas that are identified as strongholds for the species in the national recovery plan. Round 2 camera results have been delayed due to the recent extreme rainfall. If these second round of surveys is unsuccessful, it will tell us that quoll conservation needs to be prioritised in Lamington and Main Range National Park, as these areas held good numbers of quolls until only a decade or two ago. https://www.quollsa.org/